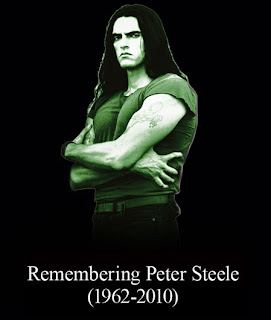 From HERE
Peter Steele is dead.

Some of you are saying, “Who?” The rest of you are agreeing it sucks.

Peter Steele was the lead singer and bass player for the Band Type 0 Negative. Once you saw him, you would not forget him. Standing at six feet seven inches he was intimidating to begin with. His presence on stage was like watching some primordial being belting out the songs. When he rolled his eyes back, you could believed that something had possessed him.

What was it about the music? The stuff he wrote could range from the romantic to the homicidal. Lyrically some of the songs were very simple. Burnt Flowers Fallen was only a couple of lines, but each one was sang with such emotion that it sounded fresh and not repeated. My favorite lyrically was In Praise of Bacchus he took you on a tour of New York as only a drunk moaning about is ex-girlfriend could. There were the ultimate angry breakup songs :Unsuccessfully Coping With The Natural Beauty Of Infidelity and Xero Tolerance. (sorry scremo bands you will never top the image of Peter with a pick ax).

The songs could be sensual, sexual, and like having aural seduction: Love You to Death, Girlfriend's Girlfriend, Their cover of Summer Breeze, the cover of Cinnamon Girl becomes wild.

His songs touched upon emotions Creepy Green Light, is more than a ghost story song, its about not dealing with loss. Death did play heavily with his themes. When I first heard Red Water: Christmas Mourning. I was shocked. He gets it I lost my mother around Thanksgiving. And to this day November and December do not excite me at all because of the holidays. He got it, he knew what it was like, and it was a relief to hear. Everything Dies, sums up the frustration with being surrounded by death. Perhaps it's only a large family thing, but it seems when there are times when everyone in your family is dieing.

I tried to listen to World Coming Down as soon as I could after I heard. Tears came to my eyes.

But now he's gone. He will be hard to replace. Not just in stature, but in his singing style; from deep rich notes to screaming like a barbarian on a raid. And no one can rip the bass strings off a bass like he could.

I am sure the rest of the members will go on, Johnny and Kenny have their own band on the side. But now a part of life has ended. And one of the forerunners to gloom metal is gone. It saddens me to think that not many people beyond his fans will care. But then he was always quick with a big “Fuck You” to anyone that felt that way. So be it.

Who am I? Just a fan. Just someone that heard the music at a time in my life when I needed to hear it. Thanks for all of it.