My intentional changes to the vampire stereotypes.

I admit it, I did think hard about what type of vampires I wanted to write about.
There was a time when the story was more of a romance, but it seemed boring to me. And each vampire seemed a cookie cutter version of a movie vampire. Again boring.
So what I did was take each vampire and give them each a twist.

What type of vampire does she become?  When you looked at the folklore, it was the mother, the brother, the husband, the son, someone close to the victims that was the vampire.

In Rhode Island this belief led to Mercy Brown's body being exhumed, her heart burned, and the ashes used in a drink, to try to cure her sick relatives. They believed that she was coming back after her death to make them ill.

She is that type, the most common type of vampire. The ones that comes back to their families. The difference is that her brother is cool with it and she doesn't want to feed off him.

So what is the twist?  I won't give it away, but I was inspired by Japanese anime and telekinetic powers that some vampires have.

Steopa is the classic Slavic vampire. He speaks with the accent. Gone is the opera cloak, but he wears a Soviet military overcoat in it's place. He can be the most brutal vampire in the story. His strength is amazing. He will use his claws and his fangs to rip you apart.

So what is his twist? The big twist, I cannot say at this point. A minor one is the hair. His hair can move on it's own. Think of Medusa without the snakes. 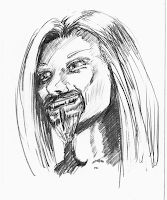 The American vampire. The charmer, the seducer, the guy everyone likes. All so he can get you into his little room and have a meal. He doesn't have to kill you, but could.

He can turn to a mist (when is the last time you have seen that in a vampire movie?), he can get inside your head, and he get inside your body (mind out of the gutter, please.)

What's his twist? It is hinted at in this story. All I will say is that I was influenced by Pacific Islander Mythology. 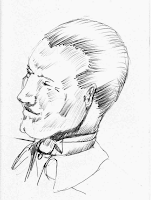 Here is the aristocratic vampire. The strange, rich man that lives in that mansion. You won't speak ill of him because you know he is powerful. But there is something odd about him.

What's the twist? There are two, but only one I will mention here. He is also a mage. Wizard if you prefer. (less Harry Potter and more John Dee). If he can't stop you using his vampire powers, he might just call up a demon to finish you off.