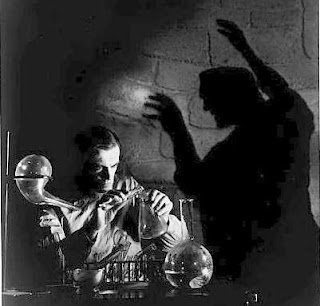 @ZiggyKinsella that runs the blog The Feckless Goblin posted this question on Twitter. "What's your top tip for developing the characters in your book?"

I have tried them. And sometimes when I get stuck I will do a little "what if" scenario. But what works for me is to just let them come. I think the best way to show it, is to run down a little history of two characters.

His development was slightly different, but since it was his character that inspired me to pick up a pen, I have to explain his birth.
I did have a dream in which he stepped out of the shadows, bowed, and introduced himself. I saw the fangs, but he was so proper, I wasn't scared. And that was the spark. That's what inspired me. How could I not be scared of a giant vampire?
When I first started to write about him, I went total monster. But threw that story out (actually I didn't, I want to rewrite it later). I really started to think about how could someone so physically intimidating, not be frightening. So I started to write stories. The rest of the characters developed around him.
It took ten years, many starts and stops, and many, many short stories, before I hit the right one. Yet, I never sat down and wrote out a sheet on him. I let it all come through the writing.
Steopa has appeared one more time in my dreams. He kissed me on the forehead the night I approved my proof. Strange, but there you go.

Grail
Grail is an example of how that ten years of development has now streamlined my character creation.
In a fantasy story, which is in it's first draft phase, Grail is the head of a band of minstrels. And he appeared as I wrote. I had a general idea of what I wanted to do with the story. That came from a question that popped in my head, "Did minstrels have groupies?"
I knew I needed three characters to begin with. But that was it. I wrote an opening scene. The scene started on another character, Rand. But Grail makes his first appearance this way:

Rand sat up. He wiped what he hoped was mud off his face and yawned. Grail was standing at the end of the alley, smoking his pipe.
“About time you woke up,” he said.
Rand rubbed his head. “What time is it?”
“If we were some of the working slobs, lunch.” Grail tapped out his pipe.
“Where Drake?”
“Securing our payment, come on, he might need help.”
Rand stood up, pausing to let the world stop spinning. Grail slid his pipe into his pocket. Rand blinked at the sunlight, starting to creep into the alley.
“Anytime you are ready,” Grail said.
“It was a rough night.”
“They're all rough nights.”
Grail picked up two bags off the ground. Rand sighed relieved. One bag had Grail's pipes and shawm. The other held Rand's nyckelharpa. Rand followed Grail out of the alley and onto the busy street.

That's it folks. The first appearance of Grail. But as I wrote the story more of him began to appear. He is the oldest character, he has been in the army, he has a short fuse, he is balding, seems to get most of the women. Even though Rand is the good looking one. But all that came to me as I wrote. None of it was developed ahead of time.

How can I do it?
I have to thank years of role-playing. That is the only thing I can think of. When you are GMing a game and suddenly the players want to explore that church and not the graveyard (which you so carefully planned out week in advance); you have two choices. One force them back to your planned out game. Or (the more fun option) is to invent on the fly, let the story develop as you let them enter the church.
That is where I learned to make up characters as you need them. I highly recommend you try it if you want a challenge.

So my top tip: Let them come to you! Don't force them. They have a story that needs to be told, you are only the one writing it. Let them take you on the trip, do force them down your path. It's more fun to see what they have planned.