Okay, it's a vampire book.  Okay, you either hate them now or love them. Here's the thing, this is my story and I don't want to be told to change it to make it more sellable.

Don't get me wrong, if someone, whom I respect, came up to me and said "Why don't you try this to make your book better." I would listen.  But lately, I have been getting well meaning people that just don't understand why I wrote my story.


A little background for those that are just tuning in.  This story, characters, and setting have been in my head for over a decade. I have tried so many ways on telling their story. Finally found one I like and it worked. So I self published it. Great. But I want more exposure. And that is were the advice starts coming in that makes me cringe.

"If you really want to sell this story, it should be a vampire romance, directed to the YA market."

First, This is not a YA novel. When I was going up, the only real YA author I read was Judy Blume. I was reading King, Bradbury, Rice, Adams, etc. Books geared and marketed for adults (some exceptions). There wasn't a real big YA selection when I was a teenager. So I never was exposed to them, until I had kids.

This story was written for me first. So it is not a story about teenagers. The average age of the characters (minus the vampires) is around 27. They have jobs, they have families, they are just working stiffs. Not something you will find in a YA novel.

Second, I don't like romance stories. I like stories that have romance in them. Let me clarify. Romance stories, by my personal definition, are romantic fantasy that is watered down erotica. Some of my first stories I posted on the internet were erotica (they are still up, I dare you to find them). I like good erotica. Don't water it down for me. If you want to write about sex, do it! Don't sell me a story of a girl, that is pursued by a man, that stalks her until she gives in, and call it romance. If that happened to me in real life, I would call the cops.

But you can have stories that have romance in them, I will like, even love them. Case in point: Discworld series. The Fifth Elephant. Angua goes off without telling Carrot why. He goes after her. NOT to bring her back, but because he knows she's in trouble and he wants to help. They don't kiss, they do fight, but it is one of the best examples of romance, that seems real.

This next bit might seem a little hypocritical. Just because it is a vampire book does not mean I want it to be just like all the others out there. These pictures are from Double-Breasted Dust-Jacket: The Vampire Reflection 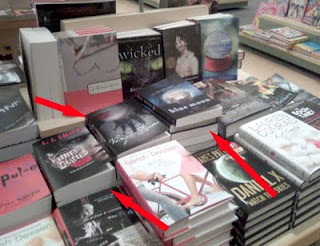 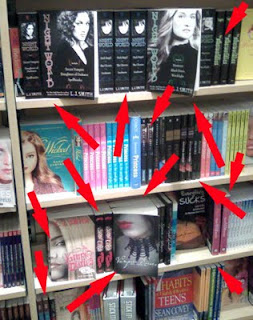 The red arrows are the vampire books. They all have the same cover. Different writers, same cover. It's starting to look like the quick little romance books that you can pick up for under 5 bucks. 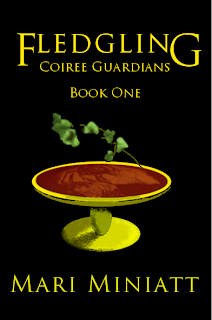 Does share some of the same characteristics. Red = blood, the black background. But what makes it different. The cup. Inside the cup there are two people reflected, but you do not see the face of the one. And the face of the other is not a "beautiful" face. I am hoping that when you see the cover you know it's about vampires, but wonder why it's not like the others.