Booze, Broads, and Blood will return. I am hammering out a major plot issue.

A lot of talk lately about "Traditional Vampires". Even I have gotten on the band wagon. I consider Beka, Steopa, Vincent, and Ogden all aspects of traditional lore. But no one has defined what "Traditional" means. Because we all have our own definition.

This is how most of us picture a traditional vampire: 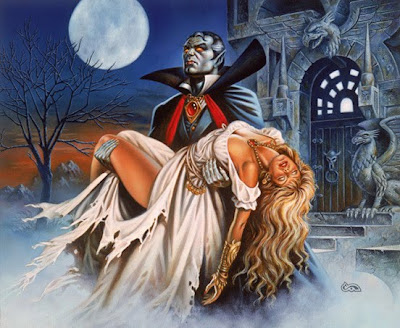 As you can see this vampire is basically Dracula, as made immortal (pun intended) by Bela Lugosi's performance.

And that is where most of us have gotten the idea of what a vampire looks like, how they act, and what they sound like. We did not get it from the books. We got it from the movies. And from those movies, we got our "rules" about vampires.

But as time went on, our rules about vampires have changed. Where they were once blood thirsty, shrewd killers. We now have "emo" vampires that are so far away from Vlad Dracul, that it would be doubtful Professor Hellsing would recognize them.

The killer that we all were afraid of, is turning out to be a nice guy. And zombies have taken over some of the traits of the killer vampire.

So that's it? Vampires have been reduced to nothing. We have some vague idea of what they are base on movies?

No, along with the taming and humanizing of the vampires. We have the other extreme as well. 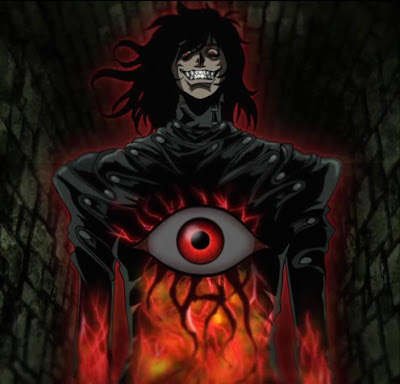 But some people will watch Arucard pull out his gun and say "He's not traditional!" Actually he is a great example of finding the old folklore and making it new again. He is a mixture of Dracula with a bit of Lovecraftian Mythos thrown in. He is closer to the folkloric vampire than many other modern interputations.

But it all means nothing. Why? Because every region, every country, every place in the world has a creature they can call a vampire. And every one of them is different. 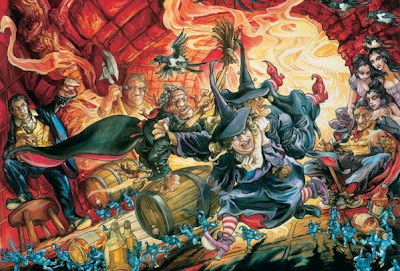 He attacked every known folklore about vampires. From the thousands of ways to kill them, to the watermelon vampires.

And even predicted parts of Twilight (Vlad falls for Agnes because he can't read her thoughts!). Everyone in the story claims to know all there is to know about vampires, but it turns out there are so many myths and legends, you have to find out were the vampire was from, before killing him.

What Pratchett determined is the vampires role, is what I agree with. They are the monster that will always come back. The one we have to rebuild and destroy. So we can face the real fears.

So with the uber romantic humanized vampires, how does that teach us about fear. Those stories, the fear of new relationships, the fear of sex (unplanned pregnancy, stds, etc), the fear of becoming too old to be attractive, I would argue is that the bottom of all the stories. Some of you might call foul. But really think about it. Do you ever see the romantic vampires going after a woman closer to their age?

And they are not that far apart from "traditional" vampires. The romantic vampire is pre-Dracula. The first apperance is in a short story written in 1819 by John Polidori, The Vampyre

What traditional vampires are, are in the mind of the beholder. There is so much out there that we can pick and choose what we like, and make our own monster to fit our needs. But with the internet the way it is, you better have a reason why your vampires do X and not Y.

As a vampire writer myself, my only hope is that I can add to the lore, and not distract from it. So enjoy your vampires how every way you want them. I like mine blood thirsty and strong.