I think we need a little more blood. 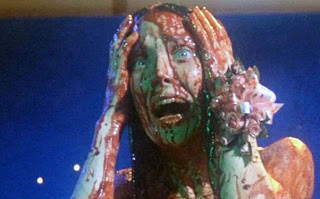 Gore. How much is too much? And why use it?

If you write certain genres, you have gore. Gore has been part of story telling since the beginning. Case in point, Beowolf:

Their hatred for each other
was boundless. And now
the brute's shoulder
could stand the enormous
strain no longer;
his muscles gave way
and massive stress
snapped his sinews.
Success in battle
was given Beowulf
and Grendel fled,
mortally hurt,
to his marsh hideout,
his dismal abode,
doomed and despairing;
he knew that his hours
were numbered and felt
death upon him.

Pretty gruesome way to die, even if you are the monster.

But when is too much too much?

That's a hard call. Because some readers love the blood and gore, it doesn't have to make sense. The movie 300, very stylish, very visual. But if a person really bled like that, they have a blood pressure that should have killed them long before they were fighting.

On the other hand in Hellboy. When Rasputian comes back. He is brought back in a pool of blood. He is covered in it. Yet, it doesn't look like gore. It looks primordial. And it is the only time that blood is used in the movie.

How do you measure when you put too much in? Depends on the story, the situation, and what you have established before.

Unless you are writing splatter or gore fiction, you should leave a lot up to imagination of the reader. The shower scene from Psycho. Never once does the knife enter the body, but it is edited so well, and the sound effects make you think it is.

The situation; Could the scene you are writing be gory in real life? My husband when he was younger, was the first person on a scene of an accident. The van had slid off the road and into a tree. My husband went up to the van to see if anyone was hurt. The driver's head had been crushed in. He told me that it wasn't until hours later did it register with him what he had seen. His mind would not let him handle the horror of it at the time.

If you were to write that scene, a little description here, a hint there. And then later bring the whole horrible aspect into focus.

Has your story established that it will not hold back? Building up the gore, is like building the tension. Start with simple things. Maybe start with a nose bleed and work your way up to a beheading.

Some writers, and a lot of movies go way over board with the blood. To the point it is physically impossible to happen. Starship Troopers a solider gets ripped apart, if you count the body parts, the man had 6 legs and 3 heads. That example is laughable. But if you go overboard, a serious scene can turn into a parody very quickly. 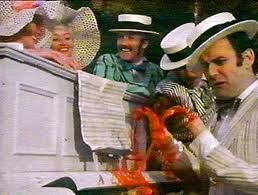 Monty Pythons "Sam Peckinpah's 'Salad Days'" The gore becomes funny, because there is TOO much.


Confession time: I don't like gore. In the 80's when gory horror movies were the big thing to watch, I could not do it. I liked horror, but I did not like the gore. It was not the gross part of it, it was the gore for gore sake. I would get bored watching the splatter scenes.

So why would I put a scene in one of my stories that involves a man being ripped in half? Because it works in the scene, it is in a genre that expects gore, and it is possible (for a vampire to rip someone in half anyway). I had no problem writing the scene, and no complaints about it either.

Gore is useful, and is a great story device, but don't make people sick. (Unless that is what you want)