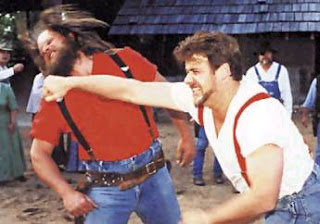 If you are going to have a detailed fight scene, please do your research.

First I would like to say, I am NOT a weapon's expert, or a martial arts expert. And I understand that most people are not. But recently, a book that I have been wanting to read, made me mad. So mad I stopped reading it. Pride and Prejudice and Zombies, you lost me at the ninjas.

Why would that bother me? I know I have to suspend my disbelief for that story. I can accept the zombie plague, I can accept the young women being raised to be killers for their own protection, but I cannot accept the ninjas or even the katana. It's like watching a non-martial arts movie and all the Asian characters are clones of Jackie Chan or Jet Lee. No matter how outlandish the story, if you want it to be real - you have to make the fighting real.

Maybe because eastern martial arts look cooler in movies that we have accepted in fiction that the hero would know them. For me, that is an insult to the people that study martial arts, all forms. This sort of thing irked me for a long time. When I set out to finally write down the Coiree Series, I did make notes on how each of the characters would fight. Because it is part of their personality.

Lets look at Steopa: Born in Lithuanian. Served in the army as a cannoner. Stayed in Saint Petersburg after he became a vampire. So would it make sense he would know Karate? No. Doing a little research I found some forms that he could have been exposed to: Fencing (partially the European Dueling Sword), Russian Fist Fighting, Stick fighting (although no evidence that it was in the region, it had versions all over), and folk wrestling. With his military background; guns and cannon included. When he fights, he is more likely to pull out a sword, than do a block and a kick. What a way to define a character!

Then there is Vincent: No formal training. His fighting style, if he didn't use his powers, would be the down and drug out bar room brawl type. Dirty fighting. He knows how to fire a gun, but would not be his first choice in a weapon.

Like I said, I am not a weapon's expert. I do know the difference between a rapier and a German Broadsword. Just like I know, there is no way some characters would know Jujutso. It is easy to copy what you see in the movies and TV when you are writing. But you have to ask yourself, is it plausible? 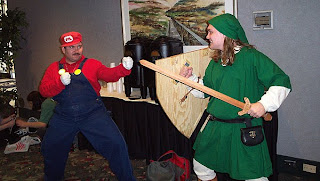 Why did the ninjas bother me so much? Because in that time period, there would not have been much interaction with the East and Britain. On top of which, ninjas were outlawed at that time. I know it sounds nitpicky, but it ruined the story for me. So you can see why spending a little time researching (especially if you are writing a historical novel) can make the story more interesting.

I don't expect anyone to write out a detailed fight scene, describing each blow and block. I have read those. They are boring. But you should respect your reader's intelligence enough to not have a 17th century French nobleman practicing Tai Chi or a Japanese warlord, sumo wrestling (although a Samurai might). You don't have to study the different styles to write about them. But you should be aware of the wide variety there is out there. It should be part of your characters background, even if it's a note like: fights - avoids them.

Fighting is a basic response to a situation. Fight or Flight cannot get any more primitive than that. It is a part of life. Granted you might not think your character will ever fight in your story, but just knowing how they would react makes them more believable. And if you want them trained, make sure you have the right style. 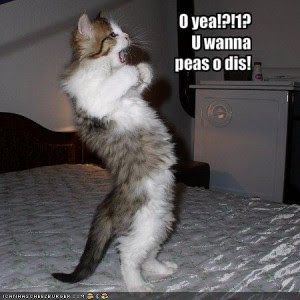 And others have noticed this too:
Martial Arts Do Not Work That Way
Flynning

And now if you don't think "real" fighting is dramatic enough, these cats will prove you wrong.