Actually, the wonder actor, Nicholas Courtney  passed away. But with his passing, so did Brigadier Alistair Gordon Lethbridge-Stewart. Dr. Who fans are dabbing their eyes now.

It was only the actor, the character can still go on. Yes ,the Brigadier can. And being Dr. Who they might find away around it. But it got me thinking. What makes an unforgettable character?

Here is a list of fictional characters that are near and dear to me: 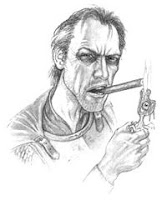 Samuel Vimes: AKA: His Grace, The Duke of Ankh, Commander Sir Samuel Vimes; Commander of the City watch, married to the richest woman in Ankh-Mopork.  From the Terry Pratchett Discworld novels.

Mr. Dark: From Ray Bradbury's Something Wicked This Way Comes. One of the owners of Cooger & Dark's Pandemonium Shadow Show.

Hannibal Lecter:  Psychiatrist and serial killer.  From a series of novels by Thomas Harris 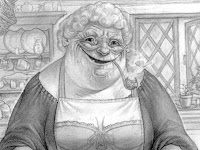 Nanny Ogg: One of the Lancre witches. From Terry Pratchett's Discworld Novels.

Shaun: from Shaun of the Dead


What is it about them that makes them stick with you long after you read the book, seen the play or movie?

None of those characters are perfect. They all are flawed in some respect.

They have a flaw that they conquer.

When you first meet Vimes, he is laying drunk in the gutter. What an introduction to a character! He has given up on his life. The City Watch is a joke, and he pictures himself as the butt of that joke. Yet, he fights his battle with bottle. He gets mad about the crime around him. And he doesn't care who commits the crime. In fact I think he loves it when he brings the rich and powerful down. Even though through marriage he is rich and powerful, himself.

They can have a conflict that becomes their defining characteristic.

Hannibal Lector. Highly educated, sophisticated, wonderful taste in art, literature, and, um, food. But he is a killer. Colder because of his background. We should be frightened of him, he is a monster. Yet, we are drawn to him, we want to see what he does. We know he will never fight his urge to kill, and we want to see him do it.

If they are a villain, they make you want to join them.

Dark offers you anything you want. He is well read, can argue with the best of them. He does not care who he corrupts, the young, the old, the beautiful, the ugly. Everyone has their failings and he thrives on using that. Even when he is defeated, you want him to comes back.

Sometimes can seem so out there, that you realize, “Wait, I know someone like that”

Nanny Ogg. Where to start? Matriarch of the largest family in Lancre.  She is the middle witch, the “mother”. Rude, dirty minded, makes drinks that will clear your sinuses before they hit your mouth. Yet. There is something about her. She can stand up to Granny (the most powerful witch on the Disc) She has a soft spot for Greebo (her nasty tom cat). As you read about her, you realize there are older women you have met, that could be her!

And lastly. They are ordinary, but do extraordinary things:


Shaun. Retail drone (I can relate). Nothing special about him. He goes to work, goes to the pub, meets his girlfriend. Rinse, lather, and repeat.  When the zombies come, he rises up. Not like some action hero on steroids. But as a friend that is looking out for the people he cares about (and a few that he doesn't).

The biggest point about a memorable character is THEY ARE NOT PERFECT!

The Brig was not perfect either. He was a good soldier, a good commander, but he made mistakes, he scoffed at the Doctor. But he knew when to step back and let others take over.

Think about all the characters you like. Are any of them perfect? If the are good looking, do they have a personality flaw. If they are a nice person, do they have a temper problem? A good writer knows to put something into that character that makes you want to find out about them. Care about them, even if they are the “baddie”. One dimensional characters are boring. Perfect characters are boring. You don't want to be boring do you?