I Don't Want to Be a Hero

There was a time when you needed a hero, in an epic fantasy, you made a perfect specimen. One that was good looking, knew how to fight, and always got the ladies. It sounds funny now.

I have been thinking about fantasy heroes lately. And I am glad we moved away from that. Because I like heroes that become one, even if they to against their better judgment.

A good, but obscure example (for Americans) is a movie from Russia called Wolfhound. The movie starts out like Conan. A young boy witnesses the slaughter of his family by a warlord, including his blacksmith father. The boy is sent away to be a slave. That is the only part of this movie that feels rehashed. Because when you see Wolfhound (he takes the name of his tribe) as a man, he's not Conan. 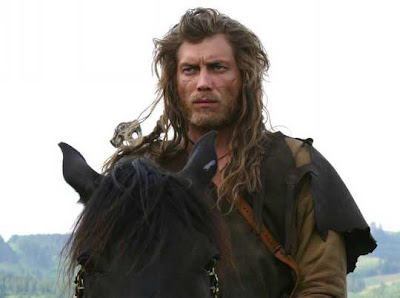 Early on, he takes revenge against the ones that killed his family and enslaved him. He misses one person on his list, which he can recognize by a wolf tattoo on the back of the murderer's hand. While doing so, he rescues a slave girl and a blind man. The slave girl had found a strange piece of pottery. The old man says it will open the "Celestial Gates" So they want to go. Wolfhound doesn't, but doesn't want those two to travel alone.

And right there is the essence of his character. The only thing he did to satisfy himself was to take revenge. The rest of the movie he is motivated to help people because they are in a worst place than he is. He is hired to accompany a princess (who has a crush on him, but doesn't fawn all over him either, she is another interesting character in the movie). Every time he helps someone the situation becomes larger, and without him trying he finds himself stopping some crazed cultists from awakening a death goddess. I also like the fact, he is not so full of himself that he doesn't fight the goddess alone. He wins, but you have to see how.


What makes him interesting? Taking the early example.

Perfect specimen? No. He is scarred, branded and whipped. Built like a body builder? No. Wolfhound had been a slave, forced to mine from a young age. His body looks like it, sinewy, slightly malnourished. He's not out of shape, but he doesn't look like someone that spends hours in a gym. Its the type of body you get when you do physical work every day.

Knows how to fight? Yes, but is not an expert. There are people he takes on that are much better than him. What gives him the advantage, is that he watches and accesses the situation before acting. He always watches. He thinks more than he acts. 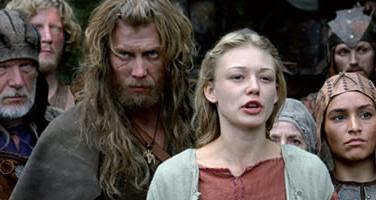 Always gets the woman? Nope. The slave girl doesn't seem interested in him, except as her rescuer. The princess wants him, he turns her down (long story on why, but he had a good reason). Does he get any woman? Nope.

All heroes have friends, he is no exception. In the cool pet department, he has a bat. It looks like a fruit bat, and will not leave his side. The slave girl, the blind man, and scribe that was a slave, all become his friends. Except for the bat, they separate and go on their own paths. They meet up at the end.

Being a hero in a fantasy story means he has to face magic, demons, and in his case a god and two goddesses. He faces all of that the same way he faces his fighting. Thinking about it before reacting. I will not say he is fearless, more like he rather not let his fear get in the way of what he wants to do.


And there is the irony in the character. Except for the beginning, he never gets to do what he wants to do! He's not like Rincewind, who gets thrown into the situation and always looks for a way to escape. He finds himself in a situation, he looks out for his friends first, then himself.

He gets manipulated (by the princess but her reasons are good ones), he makes mistakes, even though he acts like he doesn't care, he does, maybe too much.

For a straight forward, a bit complicated plot, but otherwise typically fantasy movie. The characters are what drives the film. Which goes to prove, you could have the most rehashed plot in the world, but if you make your characters have depth, and realism, you can drive the story and make it seem new.