Other than working ten day stretches (ugh), the reason I have not been posting much is while the Coiree Guardians series is being wrapped up (4th book is in beginning editing stage), I am getting ready to launch another book. This one is a fantasy road trip. Not your typical "heroes" either. All of them are musicians with interesting pasts.

This is a short story I wrote as a background on one of the characters. This is only a tease, the first 1,100 words. If enough people are interested, I will make the completed story available for free on smashwords. And maybe put some other short stories set in this world out as well... while you wait for the novel.


by Mari Miniatt
No comments: Links to this post

Don't know much about history

I am a history buff. A title I wear proudly. I love learning about history, especially the bits that don’t normally make it into the dry educational books.

Thankfully with the internet, if you are looking to expand your historical knowledge, or trying to get a child interested in the past, there are many great ways to do so. Most of these you can find samples of on youtube and some on netflix.

What is it? Horrible Histories started as a series of children’s books written by Terry Deary.

From Wikipedia: Deary commented in interview, "if I had it my way, I wouldn't have schools at all. They don't educate, they just keep kids off the streets. But my books educate, because they prepare kids for life...It's outrageous, why don't we start telling children the truth about history? I hope my books do just that."

The books present history in an entertaining, yet factual fashion. They became two television series, the first one did not fare too well, but the latest one..

Backed by great writers, musicians, and actors (many of them fill one or more shoes) the show is a great example of how entertaining a children’s show can be, without talking down to the kids. Americans around my age will remember School House Rock, same concept, but an half an hour long.

The shows show many different historical periods, feature one song, and move very quickly. It is hard to choose just one example. If you go on youtube, you can find hundreds of clips of the show. But I will shut up now and give you two examples.


Thanks to this skit, I finally got it.

Speaking of music. From Hawaii comes The Historyteachers.

Actually two teachers, one teaches history; Amy Burvall. She was looking for a way to get her students interested in the subjects that she was teaching. She uses pop music parodies. The songs and videos are amazing.


I think this is better than the orginal

Prefer your history taught more like a lecture? But one that is fun? Then watch Crash Course. Actually, Crash Course teaches two subjects; history and biology. The hosts presents the subjects in a fun matter, with a bit of animation and a wry sense of humor.

Not impressed. They managed to sum up most of Russia’s history in just over ten minutes:

Yes that Terry Jones, from Monty Python, not the other one that likes to burn things.

If you are not a Monty Python fan you might not know that Terry Jones is a historian, mainly medieval history. He has done many documentaries on different periods of history, including the history of the number one. No, seriously. But here is his take on the role of the knight, full episode.

Want to get to the meat of history (pun intended)? This series produced in 2007 and 2008 presents history via the food we used to eat. Think of it as if the History Channel and the Food Channel had a baby.

Food is an important part of history. The French Revolution would not have happened without the lack of grain. Potatoes, found in America, became one of the staples of food worldwide. The presenter live the lives of people of the time period, eat the food, and explain what was going on around the time.

This clip is from the beginning of an episode. All of them start with a visit to a doctor. Because some of historical diets were worse than ours.

There you go, jump in and get interested in our past.

Leaving you with one more Horrible Histories, just because.

So I haven't updated my blog in a while,  but that is okay. I have been prepping a new series of posts.  I am going all out, photos, videos and all that fun stuff.


More after my ad. 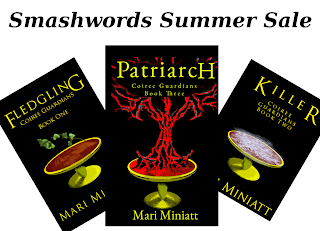 Did you know that you can get some of my book for free?  Right now! Head to Smashwords. Until July 31, 2012 you can get:
For Free
Fledgling
Killer


So what am I working on? It might surprise you, not vampires or werewolves. While I was putting my vampire series together, I also came up with another series idea.


What to expect: minstrels, thieves, dragons, magic, and bagpipes.


by Mari Miniatt
No comments: Links to this post